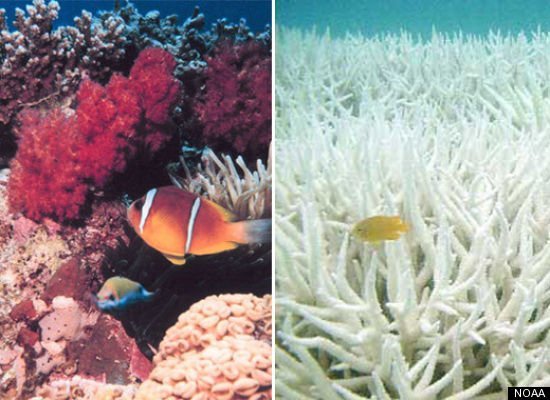 Visual evidence of climate change as documented over the last 10 to 20 years. Environmental and satellite imagery systems should be able to produce even better illustrations of the problem in years to come.

Coral bleaching, this is the process of dying coral reefs due to increases in sea temperatures along with pH/acidity levels of the seawater. This is one of the saddest facts of global warming affecting ecosystems, which not only destroys the coral but all of the life depends upon it.

The three images above depict melting and retreating glaciers

The two images above show devastation from hurricanes, cyclones and typhoons. As atmospheric temperatures increase due to carbon dioxide causing global warming, this makes storms much more energetic, higher wind speeds, and hold much more rainwater.

The melting snows of Mount Kilimanjaro in Africa.

The drying up of Lake Chad in the southern Sahara region of Africa, documented since 1963.

The two images above show the risks of rising sea levels, not only in London, but affecting huge populated areas around the world which are often low-lying along the ocean’s coastlines.

Per capita carbon dioxide emissions. This map may now have changed slightly, 2017 due to developing nations and increased industrialisation in areas such as China and India.

What is being done to tackle these climate change problems.

We know the solutions, but we must keep below the scientific 2°C tipping point.

You were not leaving your cart just like that, right?

Enter your details below to save your shopping cart for later. And, who knows, maybe we will even send you a sweet discount code :)